Light It Up Youth Fest! 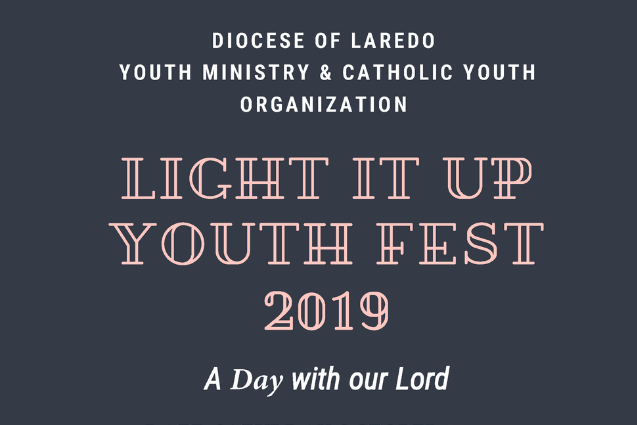 Youth in the diocese are invited to attend a brand new event hosted by the Office of Youth Ministry. This time of prayer and fun has taken place earlier this summer in Eagle Pass, the northernmost part of our diocese, and now makes its way to Laredo. Below, read a testimony of the retreat which will appear in the September/October 2019 Issue of La Fe Magazine.

The Diocese of Laredo Office of Youth Ministry held the first-ever “Light It Up” Youth Festival for the teens in the Northern Deanery, including Eagle Pass to La Pryor. Inspired by talks on burnout in ministry, the event is a way to re-ignite the fire!

Participant and parishioner of Our Lady of Refuge, Alizé Ramon, said, “It was by far one of the greatest experiences I have ever had. It was a two-day retreat, and on the first day, we had the adoration of the Blessed Sacrament. It was such an amazing and pure moment to be able to pray and talk to the great Lord because we knew His presence was there and that His ears were open.”

On the second day, the festival united the youth from the community with fun activities, games, entertainment, which turned out to be learning opportunities.

Alizé said, “The games and activities were not only fun but also taught us to understand that our Lord is always beside us. He is always happiest to see all of his sons and daughters celebrating their greatest Father!”

The retreat aimed to reignite the fire for the teens and their leaders in youth ministry.

Courtney Walker, Director of Catholic Youth Organization, said, “When the youth share what they discussed in Lectio Divina from a homily at Mass or even a conference, it feeds my soul. Christ wants nothing more than for us to spread His love and word and set this world a blazing!”