OUT OF A MOMENT OF SUFFERING, GRACE OVERFLOWS 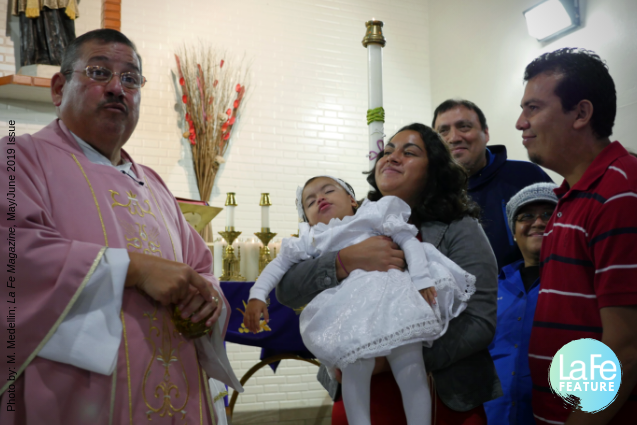 Editors note: This story will be published in the May/June 2019 Issue of La Fe Magazine of the Catholic Diocese of Laredo to be published and mailed out on 5/15/2019.

It is said that the longest journey anyone will ever take is about sixteen inches – between the head and the heart. Eduardo left the Catholic Church years ago, and Karen’s faith was running on empty when they arrived in the United States as migrants from Honduras.

“We never imagined this place would be so wonderful,” Eduardo said as he balanced his daughter, Kiara, on his knee. “The attention Catholic Charities gave us was beautiful,” continued his wife, Karen, “Being here was a joy.”

Recalling their journey was nothing short of complicated. “One suffers,” Eduardo began explaining, “but out of a moment of suffering, many blessings came.”

In Honduras, Eduardo was an experienced truck driver. During one fateful trip, his truck was stolen. After being tied up from 6 a.m. to 11 p.m., he and his assistants were finally released. Going against the criminals’ demands, he followed the law and filed a police report. The criminals pursued him at his home, threatening him with violence. Eduardo and Karen decided to sell everything they owned and choose to flee the life they knew.

By the time they reached Guatemala, their daughter had caught the stomach flu which tempted them to return. Borrowing a phone, Eduardo spoke with their neighbors only to learn that five hours after they fled, their former home was attacked in a drive-by shooting. “That’s when we knew we couldn’t go back,” Eduardo said gravely.

They made it to Piedras Negras, then Eagle Pass, but for eleven days, the family was separated while being processed by I.C.E. and Border Patrol. Once reunited, they were transported to Laredo before making their way to Los Angeles, California.

When they arrived in Laredo, they were faced with one uncertainty – how to pay for their bus tickets to Los Angeles. Much to Eduardo’s surprise, an anonymous donor from San Vicente de Paul Church offered to purchase the Greyhound tickets. The donor left them with one request. He told Eduardo, “Once you are working and someone comes to you for help if you are able, help. Never stop serving others.”

Karen approached one of the volunteers of Catholic Charities, whom they called Thelmita, and asked if they could present their daughter to receive a blessing during Sunday Mass which led to a discussion about baptism. Karen and Eduardo were in favor. With the guidance of the pastor of San Francisco Javier, Fr. Toby Guerrero, everyone got to work to prepare for Sunday. Volunteers from Catholic Charities were chosen to be Godparents and received catechesis.

Filled with hope, Eduardo and Karen became well acquainted with the volunteers and spent an afternoon rummaging through the bags of donated clothing. While searching for baby clothing, they found white shoes, perfect for the baptism, they thought. In another bag, a white headband was found. Finally, in another bag, they found a white baptismal dress!

“It was a beautiful moment! I got goosebumps from head to toe. Thelmita was on the verge of tears! It was a miracle the way the Lord knew that on that day there would be a baptism. The Mass was very melancholic,” Karen said as her husband began wiping tears from his cheeks. “Even the priest said she would become a nun!” Karen giggled mimicking Fr. Toby’s remarks to the child – Be a nun so that your parents can go straight to heaven!

Although they faced immense hardships as migrants, the true experience proved to be a journey of the soul.

Editors note: This story will be published in the May/June 2019 Issue of La Fe Magazine of the Catholic Diocese of Laredo to be published and mailed out on 5/15/2019. By Margaret Medellin