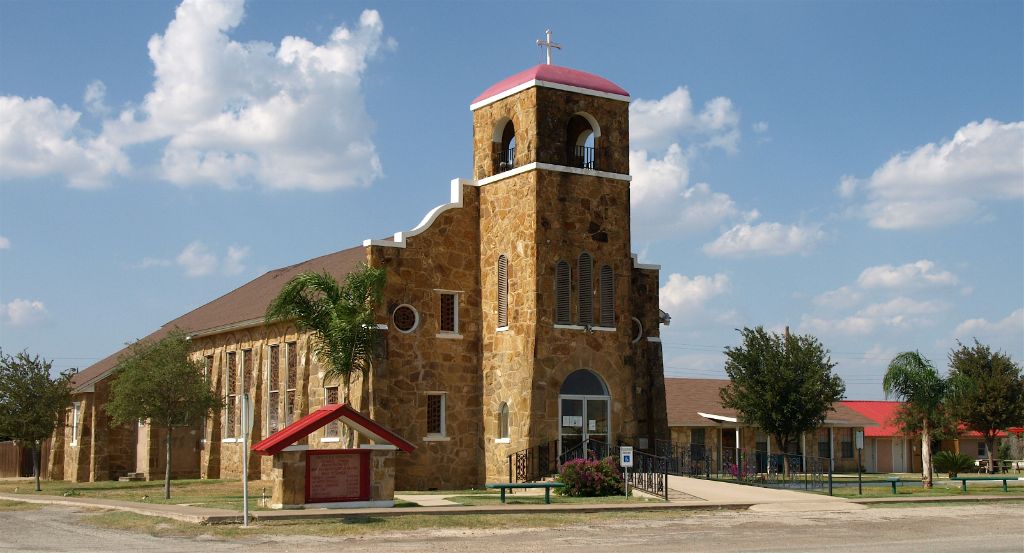 A Brief History of the Immaculate Conception Church

The history of Immaculate Conception Parish dates back to the time when the Catholic population and the ranches of Asherton were taken care of by the Oblate Fathers from Eagle Pass who were given charge in 1880. This missionary condition lasted for over 30 years.

The first frame church was erected under the direction of Rev. E. H. Derivas and was blessed on Dec, 17, 1918 by Father Charles Siemes, O.M.I. Father Siemes was the first Pastor from 1917 and remained until 1920, The church was built on an entire block of land donated by Mr. and Mrs. Asher Richardson in 1917. Rev. Charles Taylor, O.M.I. was pastor from 1921-1928. Under his direction, St Thomas School was erected in 1928. It was a two-story frame structure with the second floor used as living quarters by the Sisters of the Incarnate Word and Blessed Sacrament of Victoria, TX who conducted the school. These sisters were present until, 1943 in Asherton. In the early spring of 1935, St. Thomas school was completely destroyed by fire. It was rebuilt of native stone and blessed on July 21, 1935, under the direction of Rev. C. Ayala, O.M.I., who was the pastor from 1934-1936.

In November 1936, Rev. V Liberto was appointed pastor. A second tragedy occurred on Jan 20, 1937, when the first frame church was destroyed by fire. A new church was rebuilt of native stone and blessed on March 27, 1938 by Archbishop Drossaerts. An adjoining room to the sacristy served as the pastor's living quarters up until the time when a four-room frame house was moved close to the church to serve as the rectory, Rev. Liberto remained the pastor until 1943. Rev. Leo St. John, O.M.I., was appointed pastor in 1943. This same year, the Sisters of St. Benedict from Crookston, Minnesota began teaching at the school until its closure. A census in January 1948 showed a total of almost 1000 souls. Immaculate Conception originally had one mission, St. Michael's Mission in Big Wells and two stations in Catarina and Valley Wells. Next to succeed was Rev. Arthur N. Kaler, O.M.I. until 1952, followed by Rev. J. Diehl (1953-56) and Rev. Thomas M O'Conner (1956-59.)

Rev. Xavier Francisco, O.M.I was our longest serving priest from 1959-1977. During his time in Asherton, a sizable donation was made by Archbishop Francis Furey. This donation helped offset the cost of much needed repairs for the parish, convent and CCD center. St Thomas School was closed in 1969 due to financial difficulties and was consolidated with the public schools. After the departure of the Sisters of St Benedict, missionary sisters were acquired from Our Lady of Perpetual Help in Mexico City and remained in Asherton until 1971. Other sisters that have faithfully served our parish included the Missionary Carmelite Sisters from Houston, TX and the Sisters of Divine Providence from San Antonio, TX. These sisters served our community from 1972-2015. Other priests that followed were Rev. Felipe Matias (1977-78) and Rev. Donald Haile (1978-82). Since the 1960's, for approximately 50 years, church bingos had been conducted in Asherton to help with financial expenses, construction and repairs. These bingos were first held at the old parish hall, later called the Seniors' Building. During Rev. Msgr. Henry Moczygemba’s stay as parish priest (1982-1990), both St Henry Mission was established (1984) and Msgr. Henry Moczygemba Parish Hall (1985) was constructed and inaugurated. The priests that followed included Rev. Emmet Carolan (1990-95), Rev. Mauricio Lopez (1995-97), and Rev. Miguel Arrango (1997-1998).

Rev. Toribio Guerrero was the parish priest between 1998-2004. It was during this period that Pope John Paul Il created the Diocese of Laredo and named Most Reverend James Anthony Tamayo as the First Bishop of the Diocese of Laredo. The new diocese established on July 3, 2000 included parishes from the Diocese of Corpus Christi and the Archdiocese of San Antonio. Since Asherton became a part of the Diocese of Laredo, 6 other priests have succeeded including Rev. Agustin Escalante (2004-05), Rev, Salvador Pedroza (2005-11), Rev. Oscar Martinez (2011-13), Rev. Fidel Gonzalez (2014), Rev. Jan M Ziemniak (2015-2021), and Very Rev. Francisco M. Quiroz-Carrizales (2021- present).

From its establishment throughout history, Immaculate Conception Parish has had 28 priests and according to sacramental books 7,152 Baptisms, 1557 Confirmations, 1,609 Matrimonies, and 918 deaths have been recorded.

Parents attend Mass for a minimum of two months prior to baptism. Registration is required by the 15th of each month to schedule required baptismal class. Baptism registrations forms with guidelines and required documentation are now available at the entrance of the church and parish office. Please call the parish office for information on all the requirements.

Individuals seeking  to marry at Immaculate Conception Church, Saint Michael Church, or Saint Henry Church must be registered in our parish and attending Mass for minimum six months before marriage. They must meet with the priest, six months prior to wedding date. Please call parish office for information on all requirements.

Families wishing to celebrate their daughters Quinceañera  must be registered in our  parish. They must be attending Mass in our parish  for six  months prior to the celebration and are required to be attending CCD classes.  For a full description of  requirements please call the parish office.

Anointing of the Sick

Please call the parish office as soon as you or someone in your family is scheduled for surgery, is hospitalized, or suffers serious illness or injury.

Please advise the parish office of the preferred language for the Mass, burial or cremation plans, selection of lector, readings, and music arrangements for Mass. Funeral reception hall rental needs to be paid six days prior to use.

Ministries in the parish

Ladies of the Vela Perpetua

We invite you to join us to pray and serve to the community by the advocate of Our Lady of Guadalupe every second weekend of the month during the Holy Mass. Los invitamos para orar y servir a la comunidad bajo la advocación de Nuestra Señora De Guadalupe en cada segundo fin de semana del mes durante la Santa Misa.

The Knights of Columbus

We invite you to join us to live your faith at home, in our parish, at work, and in our community. We will pray and serve every third weekend of the month during Holy Mass. Los invitamos para vivir su fe en casa, nuestra parroquia, el trabajo y en nuestra comunidad. Rezaremos y serviremos en cada tercer fin de semana del mes durante la Santa Misa.