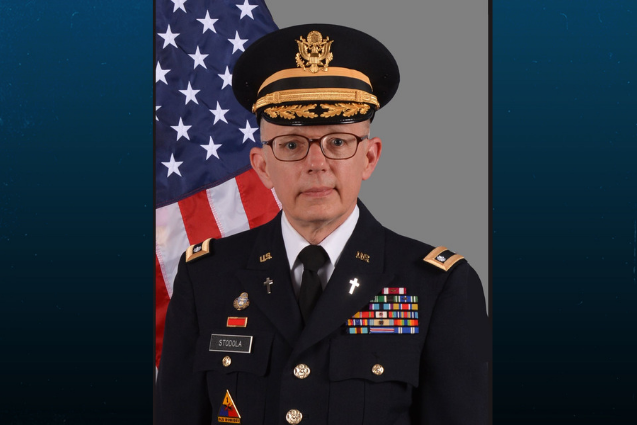 Rev. Father Francisco Stodola, pastor of Nuestra Senora del Rosario parish in south Laredo, has retired from the Texas Army National Guard after 22 years of service.  A ceremony was held Aug. 23 at Camp Mabry in Austin to commemorate the event.

Father Stodola began his military career as a battalion chaplain at the 4/133 Field Artillery in New Braunfels after being commissioned a First Lieutenant in 1997. He also served on active duty from 2002-2007 with the 501st Military Intelligence Battallion in Wackernheim, Germany. At that time he was deployed to Iraq for 13 months.  A native of Indiana, he also served as Garrison Chaplain at Fort Sam Houston in San Antonio and at Fort Jackson, S.C.

Upon returning to Texas in 2007, Father Stodola was at the 3/141 Infantry in Weslaco,  the 36th Combat Aviation Brigade in Austin and 72nd Infantry Brigade Combat Team  in Houston.  His last assignment was chaplain for the 141st Chaplain Detachment at Joint Forces Headquarters in Austin. During that time he was deployed to Afghanistan for nine months. Father Stodola retired with the rank of Lt. Colonel.

Father Stodola has recived many awards and citations during his 22-year career but says his greatest reward was to be able to serve the spiritual needs of soliders.  He emphasizes, “I am greatful to Almighty God for this opportunity and to the Blessed Virgin Mary for her constant protection.’’

Before Nuestra Senora del Rosario Father Stodola served as parish priest   in the Diocese of Laredo in  Cotulla,  and Laredo St. Patrick, Christ The King and Santa  Margarita de Escocia. Father Stodola was also a board member of the South Texas Food Bank.